01 Dec To The Heights: A Novel Base on the Life of Blessed Pier Giorgio Frassati

Posted at 07:14h in Books, Teens by Liz Lantigua 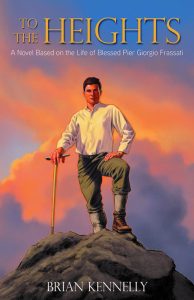 “To live life without faith, without a patrimony to defend, without a struggle for truth, that is not living, but existing.”

This is a fascinating historical fiction novel on the life of Blessed Pier Giorgio Frassati (April 6, 1901-July 4, 1925). He was beatified on May 20, 1990 by Pope John Paul II who called him a “man of the beatitudes.” He came from a wealthy family but spent his life in the slums of Turin serving the poor. He was handsome, funny, and athletic. Teens can easily identify with his  20th century appearance. He lived in modern times, and was an example of placing Christ first in his life.  Good News! Book Fair finds this book an amazing read!